Getting new music tours halfway down into Florida- usually a day in and a day out by motor vehicle- is a rarified business. Orlando is no Rochester, New York or Erie, Pennsylvania. Those are tertiary market cities rich with creative music visitation. They sit in planar, halfway travel point convergence with your ancillaries and primaries of various touring schema. However, with a hint of Trumpian gusto, we can proclaim that we have a high rate of return visits once our artists get here and get vibe. Central Florida has trained listeners and they are rated Nice by so many of our creative music heroes. We’re a verdant, sun-soaked, service industry town looking to spackle, sand down and base coat over the cultural bruising delivered by comedy writer’s rooms. It works. Ava Mendoza and Jessica Pavone are both return clients of ours, this time delivering solo sets and duo work on a late summertime loop around the right side half of the country. 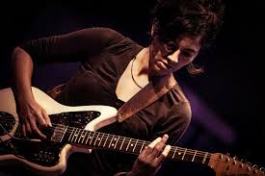 Back in 2015, Ava Mendoza delivered an authoritative set of New York Downtown post-jazz/No Wave sound via her Unnatural Ways trio on the Park Avenue CDs stage. Just before that cm5 concert, the guitarist levitated the compact WPRK-FM Studio A control room, delivering a solo electric set to the Jazz In The Bible Belt listeners. Her solo set drew upon tradition; a Fender Twin Reverb amp delivered that time-honored untamed timbré as the blues were getting a systematic, centrifugal deconstruction.

Several years hence, Ava Mendoza made a move from California’s Bay Area to Brooklyn to present her hybrid jazz, rock and blues guitar fingerpicking experiments in an often impertinent and compelling fashion. Like Marc Ribot or the late Sonny Sharrock’s myriad guitar-led ensembles, Mendoza’s amplified guitar considers, dices and combines many aesthetics without seeming beholden to any single outcome. Add Nels Cline to her Mills College professor Fred Frith- influencers and bandmates, both- as another hint to Mendoza’s potential outcomes. Aside from the still challenging moments that the early Eighties’ NYC Downtown scene provided, possibly the greatest contribution is the continuing emancipation from artistic strata. Mendoza, like so many younger creative musicians, appears at those edges of the pop music world, too. Mendoza has played with Mike Watt, Tune-Yards and Carla Bozulich. Mendoza appears in Orlando just as a split solo guitar LP with Sir Richard Bishop has become available. 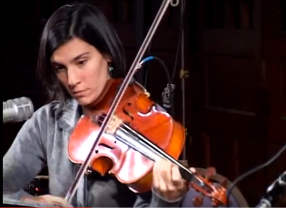 as part of the equal shares collective The Thirteenth Assembly. Pavone’s recording appearances date back to 1998, with various Anthony Braxton ensembles and her five co-leader collaborations with guitarist Mary Halvorson (this Eugene Chadbourne review of one is in the old school spirit of Lester Bangs et al.) being the quickest references. Pavone has just also released a new solo work to tour behind- Silent Spills. Mentor Anthony Braxton is known to encourage musicians in his circle to develop singularity rather than fealty. After a near two-year layoff from the viola, Pavone returned to the instrument with a strong focus on long tone playing, less traditional (Western?) intonation and carefully developed electronics processing. This summer’s Silent Spills CD EP and her 2014 Knuckle Under LP issue reports on her focused progress, post-return. Braxton’s mentorship and encouragement also led to Pavone’s 2015 chamber orchestra debut of When The World Changes at the elder’s Tri-Centric Commissioning Series at Roulette in Brooklyn.

Take part in the this instant arts community created at each event by appearing willing – described by composer Anthony Braxton as the “friendly experiencer.” The Gallery at Avalon Island opens at 7:00 p.m. for gallery viewing and a donation bar. Join the music scene in Avalon’s affable theater upstairs at 8 p.m.

One thought on “Ava Mendoza and Jessica Pavone at Gallery at Avalon Island- Thursday, August 25th”